In a cavern, in a valley, excavating for a mine

“You are in a maze of twisty little passages, all alike.


Ennis Cave, Stone County, Arkansas.
In July, 1966, I had the pleasure of participating in an extended trip south from Columbia, Missouri, through the Current River area of the state and an incursion to the fabled Ennis Cave. We were led by our amiable friend, Earl Neller.
Ennis Cave was first announced to cavers in an issue of the MMV Underground in the arly 60s. Its history is long and interesting. There was then only a crude map, but the description caught my imagination, and a spectacular slide show at an MMV meeting was the clincher. There were broad tunnels with remnants  of manganese miners’s carts and tracks and a Maze, plus a large Breakdown Room. The cave climaxed in a spectacular Waterfall Room. For the daring, a descent of one precipice and a climb back up the other side revealed a Crystal Room.
Arriving at the cave entrance was in itself an adventure. When we crossed the Arkansas line, we were leaving “First World” Missouri and entering what was then “Second World” Arkansas. This was noticeable in the generally poor infrastructure of roads and often nonexstent bridges. There were simple, cable drawn, current driven ferries, as at the Norfork and White Rivers. We arrived in Mountain Home and sampled the local cuisine at The Angler’s Cafe. Then we pressed on to the ferry crossing of the White River at Calico Rock. The ferry was cable drawn and the gunwales were barely above water level.
Once on the other side, the pavement ran out as we entered the Sylamore National Forest, which surrounded the mysterious and intriguing Half Mile Cave. The fact that access was very limited added to its allure. (It was later developed as Blanchard Springs Caverns). We motored 17 miles through the forest, emerging onto pavement at Sylamore. There was another ferry there, back across to Izard County on the east side, but we wound on up Arkansas Highway 5 to Mountain View. (Years later, it would become our home for over 16 years.)
This small town had not yet attained its fame as a folk music capital. The Main Street was not paved. and I seem to remember wooden sidewalks, but that could be a delusion of faulty memory. There were a few, primitive eating places. Years later, there would be more, but the generally dire quality of food wouldn’t change much.
We continued on eastward, nearly to the county line, where we turned off onto an unpaved road through what could be called “Deliverance Country”. After several dusty miles, the road descends to the White River flood plain. Tall, impressive bluffs mark the opposite Independence County shore.
The cave entrance is located in a dreary, shallow valley on a wooded lane. It has always struck me as a particularly odd location for a cave entrance.

The sinkhole showed obvious mining activity. A huge, rotting log hung down over the shaft. At the bottom of the slope, about 50 feet below, the sinkhole funneled to a constriction where debris had made a cone. We descended on a handline to that point, then chimneyed down a few feet to a tight crawl skirting the debris cone. At that time it was possible to crawl around the back side of the cone and emerge in the mined section of walkable passages. 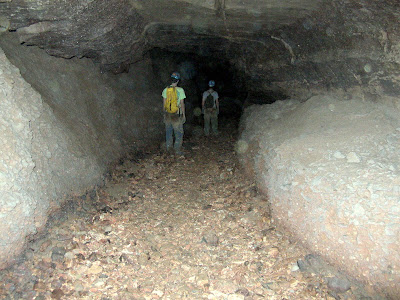 Once past the dismal mine area, passages opened up in several directions. Walking passages went off in every direction. To my receptive mind, it was a maze of twisty large passages, and not all alike. This was exactly the kind of cave I'd been waiting for. 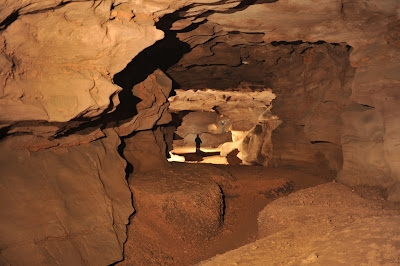 Smoth contoured walls, dry gravel floors (this is not always the case during seasonally wet weather. We have seen the cave flood to where we had to skirt deep pools by rerouting through higer side galleries and on high gravel banks.) 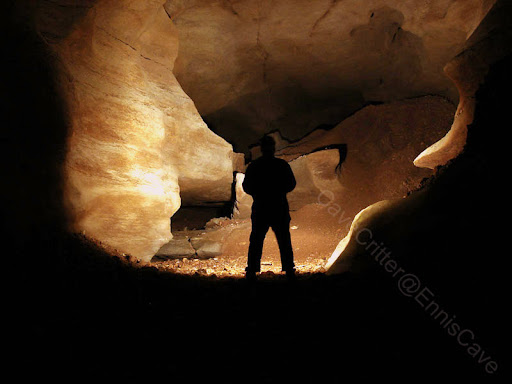 Earl led us on a quick tour, which did a lot to form my first impressions of a large and relatively complex cave, with numerous branches. Best of all, it was nearly all dry, at least on that visit, and it had “go” potential for more cave. I really loved the “Maze”, a complex of beautifully sculpted passages flanking the main passage, and reconnecting to it through a small short crawl that dropped into an alcove of the large and bewildering Breakdown Room.

After we emerged late to the surface we crashed into our sleeping bags, dreaming of mazes of endless, twisting passages.
The next day we were joined by legendary Texas cave photographers Carl Kunath and Pete Lindsley, and the Daddy of Arkansas caving, Jim Schermerhorn. Jim was best known for his explorations of Fitton Cave.
Our goal was the Waterfall Room, a huge dome-pit over 100 feet high, garbed in massive flowstones and stalagmite pillars. A balcony halfway up gave a good viewpoint. A waterfall drizzled from the nearly unseen ceiling. Getting to the floor was an awkward process with a couple of inclined slot-crawls and a handline descent to the graveled floor. 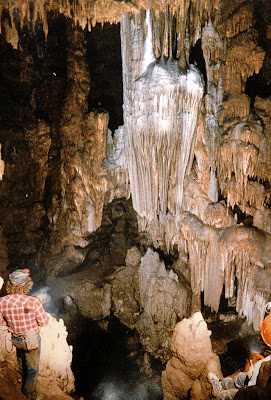 There were remnants of fallen stalagmites, now solutioning away through the inexorable drip of the water.
Earl led the way up several pitches to a ledge on the far side of the dome-pit then tied off a cable ladder and a handline rope to add security and confidence for our ascent.  A narrow ledge continued alogside a void, then ducked into the safety of a crawlway, which in turn led to the Crystal Room. 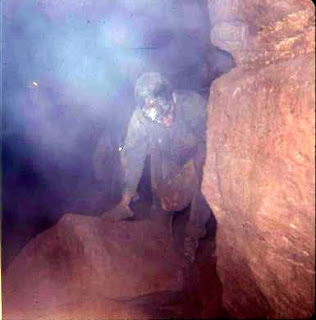 The small gypsum flowers had already suffered traffic and collectors, but enough remained to grace the garage-sized chamber. There were also glassy helictites. 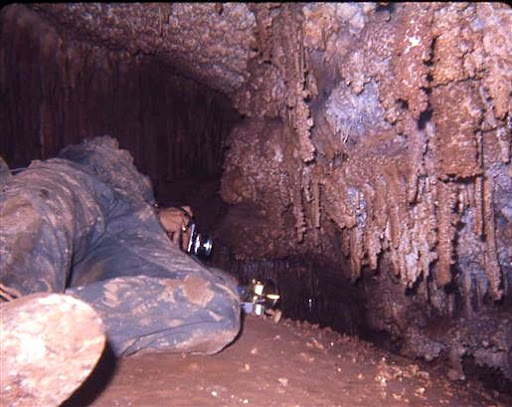 Once the obligatory photos were taken, we exited from the Crystal Room, descended the wall, reascended the far side, and not without some difficulty, and strolled our way back through the main passage to the entrance.
So ended my first visit to Ennis Cave. In September, 1972, Chuck Van Arsdale and I made a 24 hour road trip from Springfield, MO to northern Arkansas, with Ennis Cave as the last cave of our very long day. We arrived just before sunset, and didn’t emerge until 11 p.m. Back in Mountain View, we hungrily gobbled some cold fried chicken and sliced tomatoes at the funky Mountain View Cafe, the only place open. I remember there were gaps in the floorboards which looked down onto the ground. Then we headed home on dark, winding roads, trying to keep each other awake as we took turns driving. It’s a wonder we made it alive to Springfield. I couldn't remember crossing the Buffalo River bridge.
I grew enamored of the cave, and in the later 70s, initiated a cave mapping project headed by Robert L. Taylor, which eventually gathered over four miles of survey. At the time I saw that many apparent “dead ends” could be extended by looking more closely, up, down, sideways, out of the corner of one eye. The cave continued to fascinate us, but significant extensions were elusive, until July, 1974.
My caving friends were more persistent than I. While I was away on a trip, Lon Odell and sons, and Bob Taylor, squirmed through a maze of breakdown from an obscure alcove of the Breakdown Room to find an extension later called “Avenue E”. It's a complex of crawls and a short spacious hall, with slick mud slopes to a tight stream. There are still tight, blowing leads off that extension.
In later years, members Randy and Kevin Rose of the Kansas City Area Grotto purchased the land around the cave entrance, made it into a preserve, improved the entrance and gated it. 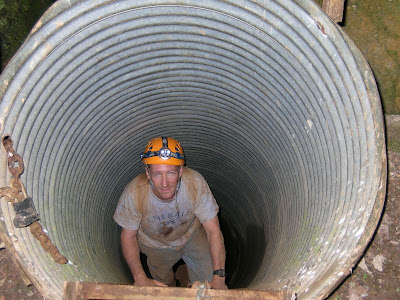 They developed a cavers' campground, outhouse and sauna, and went on finding new and often very attractive areas underground. One new find was within a short distance of the entrance.

Acknowlegements: Earl Neller, who first took us to Ennis Cave; Brent Wilkins for support and use of his photos; Teddy Marsdan, for kindly letting me use her artwork; Marty Griffin, for photos and encouragement' and especially, Randy and Kevin Rose, owners of the Ennis Cave Preserve, for their help, permission to use media from Enniscave.net, and especially, for making the cave safe to enter and accessible to qualified cavers.

A Memorial thank you to pioneer caver Lon Odell, and to Chuck Van Arsdale, who enthusiastically joined me on that wild ride, Labor Day, 1972. 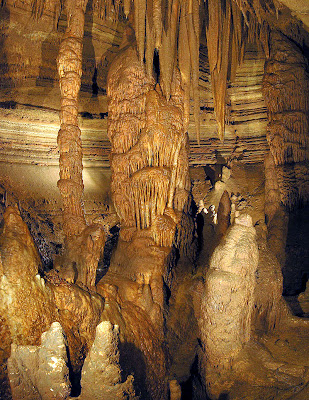 Here’s a YouTube video, created by Rick Hines, showing off some of the features of Ennis Cave.
Posted by Don Cuevas at 4:43 AM

Ennis Cave memories! It truly is a wonderful cave and it teases one into wishing there were miles and miles of the characteristically easy strolling, meandering, gravel-floored boreholes. Maybe they are really there, just waiting to be discovered?

Just breathtaking. The beauty of it all, lucky you to have seen all this firsthand. I watched the video and was just awestruck. I have no words other than thank you for sharing your exciting experiences.

A couple of hours ago, I had an email which animated me to think of how I could combine caving stories and food/cooking. I think I've come up with this, and it will be published soon (Dios primero) on http://mexkitchen.blogspot.com/

(It will go beyond cans of Spam, Vienna sausage , and potted meat food product.

Another fascinating story. It must have been exciting to have been among the first to ever set foot in some of those passages. And I liked your above-ground descriptions as well. Gracias.