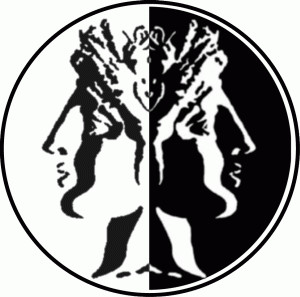 “You are standing at the end of a road before a small brick building.
Around you is a forest.  A small stream flows out of the building and
down a gully.”— From the early computer game, Adventure, by Will Crowther and successors.

You are standing on a hillside in Stone County, Arkansas. Around you is a forest. A small, wet weather streambed goes down hill to end in a dark, vertical shaft.


A rope tied to a tree overhanging the shaft twists downward into darkness. A cold draft blows down the pit on this cold, drippy, late November afternoon. Where is Lon Odell? He’s been down the pit at least 45 minutes since he’d bottomed it, then barely in earshot. We had to tie on a longer rope so that he could complete the final 60 feet pitch.  When he stepped off the ledge, the elastic rope gave way under his weight and he yelped as he bounced, like a startled yo yo.

My patience finally ran out and I was consumed by curiosity. I nervously put on my homemade nylon seat harness and clipped in my rappel rack. I’d done some vertical drops before, but never into any as deep as this pit. 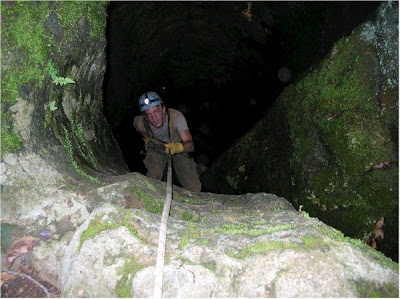 After a short step of only 9 feet, the shaft twisted, then plunged into 140 feet of blackness, although at the time, we were unaware of its depth. It continued downward, now larger in diameter. I passed Lon’s step off ledge. Suddenly, the leaf strewn, gravelled bottom came into sight, and my feet touched ground.

As I got out of my rappel gear, Lon came running over toward me like a madman.
“It’s huge and it goes!” he exclaimed. He was nice enough to show me the broad, 15 foot high downstream passage he’d explored. After a few hundred feet, we had to crawl over fallen slabs of ceiling, then slide down a breakdown slab into an major turn of the trunk passage, where it became even larger. Later, this room took the name "The Arena".

A small stream could be heard and occasionally glimpsed in low crawl spaces under the walls. We passed through another short crawlway on our hands and knees, then slid down into an extension of the passage some 100 feet or more long and 30 feet or more high. The stream emerged from the right wall, crossed the room, and slid into the breakdown blocking the room to the left. Above, the massive slope of breakdown rock ascended into friable shale beds.

We went up the slope and Lon tried to work his way in, but it was extremely unstable. This was not a viable route.

The stream went on to somewhere, but could we follow? The partial answer to that would wait two years and the final answer yet another two.
Where rappelling in had been exciting fun, ascending 150 feet of rope on primitive and unrefined gear was a major effort. We eventually were motivated to upgrade our vertical equipment, but not before some almost humorous incidents.


We'd learned through Dr. Carroll Smith, faculty advisor to the Harding College cavers that there was another, even larger pit nearby. With the help of our local friend Albert Fulks, we went down the ravine on the south side of the ridge. There we found a gaping hole, divided near the top by a narrow natural bridge. The pit dropped 145 feet, and although it was much more voluminous than Janus Pit, we could find no ongoing passages at the bottom. There was a stream coming out of the east corner, flowing along the north wall, and disappearing into a sump in the eastern wall. The downstream sump later was the scene of elaborate activity as our caving friends supported several Southeastern cave divers, but no extensions were found. The upstream sump remains unchecked.

Where does all this water flow? It emerges at Cave River Cave, several thousand feet down the hollow. We demonstrated this in February 1975 by a fluorescein dye test, having left dye traps in both Flitterin' Pit and CRC. CRC is a beautiful stream resurgence at the base of a cliff. It was possible to enter, past a noisy colony of bats, wading, floating and swimming in inner tubes and wetsuits, to a sump room. There the water is over 15 feet deep, and the sump continues. Cave diving efforts in July, 1978  by Don Monnot and Ed Arters were successful in breaking through to extensive "dry cave" passages (air filled spaces) but no connections were made to the other caves.

New Years Holiday, 1974-75
A large turnout of School of the Ozarks Troglophiles Club and friends descended the pit on New Year’s Day. Even before I touched bottom, the wiry Joe Vandiver had squirmed into breakdown just off the base of the pit and found an extension, It would be later named January Avenue and the dryer, more pleasant passage found by Lon would become December Avenue.

January Avenue extended a couple of thousand feet to the northeast, muddy, wet and breakdown strewn. A subsequent visit by Lon, his son Loren and Annado Kramer, Doña Cuevas and I extended it as a wretched canal of armpit deep water, ending in a high ceilinged room eventually choked with gravel and breakdown. The downstream enigma remained.

I gave the cave the name “Janus Pit”, after the Roman god of beginnings and the new year, whose two faces looked back into the old year and ahead into the new. I attached much mystical import to this as way to enhance the exploration experience. I was obsessed with the cave and its potential for extension.

July, 1976.
During a winter camp-in trip with Bob Taylor who’d begun mapping the cave, I’d poked into the breakdown at the lower end of the December passage, where the stream disappeared. By removing numerous smaller rocks from beneath massve ones above, I’d been able to advance through exceedingly awkward, barely contiguous spaces to some fairly solid stream crawl, maybe 150 feet downstream. The promise was there although the way was difficult. I stopped at a small enlargement of the crawlway at a "beach". I named the crawlway the "Hassle".

On an April trip, in which I did not enter the cave, Odell and Kramer were down cave when a heavy rain hit the area. The gully into the cave was flowing water in generous quantities. The cavers decided to ascend the pit. Lon's sit-stand rig allowed mch of the water to pass harmlessly between his legs, but Annando climbed out in the full brunt of the falling water. He was a stubborn and tough old caver, veteran of several Carroll Cave, MO camping expeditions, and made it out intact. However, he told me he'd never go in again.

At that time, we didn't haul our gear up with us as we climbed, but instead, pulled it up afterward. This was an error, given the twisting layout of the pits, as well as the added weight from the water. It was learning the hard way.

In July, '76, we had an infusion of high energy of Lou Simpson and Barb Schaefer (later Simpson), from Ohio; notable hard cave pushers but with a sensible aversion to floodable low level passages. Their energy would not be applied to low level, floodable crawlways. Also joining us was Joe Vandiver, a hard core caver from St. Joe, Arkansas.

After doing some basic mapping upstream and beating our way through an awkward slot into a large domepit, the Ohioans left while Joe and I pushed the Hassle through contorted constrictions, often with little airspace. Sometimes it was passage creation based on a dream of more caves beyond.

About 200 feet into the Hassle, about 50 feet beyond my "beach" Joe pulled out a rock below water level revealing a miniscule crack, and we squirmed through into a 15 foot high fissure with solid walls and a ceiling comprised of huge, jammed boulders. To the left, the stream sank in a muddy sump.

To the right, an easy climb went up into randomly chocked blocks. Joe squeezed up between them and said he could see a large black space, but he feared that moving upward might cause them to shift. We had reached our limit of risk taking, then retreated up the crawl, pushing our packs against the unusually strong currents.

We had learned that waiting time to climb out could be long and cold, and I'd gotten into the habit of putting on a heavy duty trash bag with holes for head and arms, plus a wool cap. Once on rope, the ascent was a warming exercise. Our vertical technique was incrementally improving, but the climb out was rarely easy for me.

We now knew that big cave might lay above and beyond, but we didn’t know how we could safely enter it. We had to wait two years to find out.
end of part 1

CAVERS! If you have any photos of the larger rooms and/or passages in Janus; or any pictures of Cave River Cave that you'd be willing to share, please leave a non-anonymous comment and I'll get back to you.
Posted by Don Cuevas at 4:47 AM